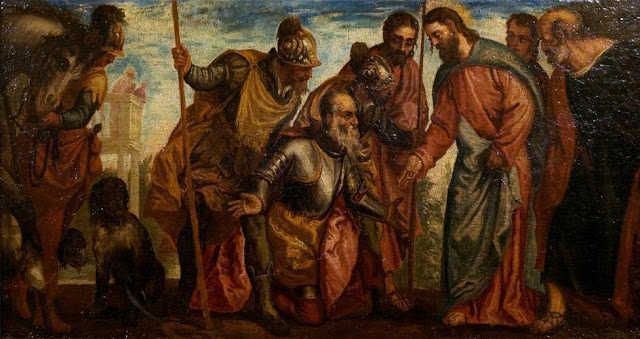 That very day, the first day of the week,
two of Jesus' disciples were going
to a village seven miles from Jerusalem called Emmaus,
and they were conversing about all the things that had occurred.
And it happened that while they were conversing and debating,
Jesus himself drew near and walked with them,
but their eyes were prevented from recognizing him.

St. Paul famously said, “if Christ has not been raised, our preaching is useless and so is your faith.” (1 Cor. 15:14) It is a phrase often repeated by Christians in this Easter season.  It is, to some of them, a pledge of allegiance to the supernatural element of faith and the instances of the unexplainable in Scripture.  In our skeptical age, it can serve as a doctrinal gatekeeper -  keeping out the Doubting Thomases who find that aspect of faith less than compelling.

I respectfully disagree with St. Paul.  Our Jewish brothers and sister have faith in God despite having no confidence at all in Jesus’s resurrection.  Our Muslim brothers and sisters believe Jesus did not die but was raised bodily into heaven, and so do not pass St. Paul’s test, but nonetheless have a robust faith in God. Resurrection and bodily ascension is not unique to Jesus.  Isaiah was raised into heaven by a flaming chariot and horses.  Enoch may have ascended into heaven.  Jesus, during his lifetime, raised Lazarus from the dead, and Peter and Paul both demonstrate the ability to raise the dead themselves.

Those who are skeptical of the supernatural, magical claims of faith and Scripture often swing the pendulum too far toward the moral.  They reduce Jesus to a moral example: a cosmic proponent of virtue, a good man sent by God to increase charitable contributions and to encourage the development of talents for the common good.  To enormous swaths of Christianity, Jesus and God are cheerleaders of good public policy, demanding certain political allegiances which, if followed, will lead to a utopian global government characterized by tolerance, compassion, and equality.

But there are countless examples within Scripture that indicate Jesus was not interested in being a moral example.  Perhaps the most egregious is his treatment of the Canaanite woman seeking healing for her possessed (or epileptic) daughter.  She was a member of a hated minority, whose land was conquered and occupied by Jesus’s community – the accursed descendants of Noah’s son, Ham.  Jesus eventually helps her, but only after he declares her value to be equal to that of a dog and she accedes to the comparison. No moral example is moral only some of the time. Additionally, Jesus outright resisted comment on the political situation of his time – deftly avoiding criticism of the Roman occupiers.

No, there is something more to faith beyond the magical and the moral.  It does not lend itself to pithy theologies that can fit on a bumper sticker. It is difficult to talk about. It requires language of Redemption and Salvation that does not come easily to modern lips.  It is a belief system rather than a value system.  But the belief system is not dependent on the miraculous.