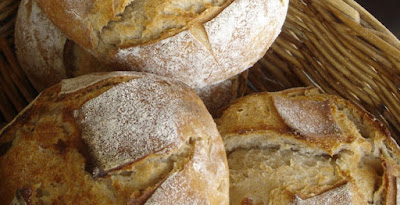 Jesus said to the Jewish crowds:
"I am the living bread that came down from heaven;
whoever eats this bread will live forever;
and the bread that I will give
is my flesh for the life of the world."

Bread appears as a prominent symbol throughout Scripture.  God provides, on a daily basis, manna to the Israelites as they journey from slavery in Egypt to the Promised Land. Elisha used twenty loaves of barley bread to feed one hundred men (2 Kings 4:42). Jesus would feed five thousand men (and an indeterminate number of women and children) with just five loaves* and produce twelve baskets of left overs (John 6:1; Luke 9:10; Matt 14:13; Mark 6:34).  In the Gospels of Mark and Matthew, Jesus performs the miracle a second time, multiplying seven loaves to feed four thousand with seven baskets of left overs.  In this Sunday’s Gospel, Jesus refers to himself as bread, and it echoes Jesus’s breaking of the bread at the Last Supper in the other three Gospels.

Bread falling from heaven to satisfy all; bread multiplied to feed an improbable multitude with more left over than the original amount; the Incarnation of God referring to himself as bread that dissipates hunger and even death.  These are all symbols of immense divine abundance.

The human economy treats everything of value as scarce and requiring fair and equitable distribution - the first in good behavior will be the first in line.  The overarching message of Scripture is that God’s economy is different.  That which is most valuable is available to all with even more left over.  There is no need to judge amongst ourselves who is deserving or not deserving, because we will all get more than we need - the first shall be last, and the last shall be first.   But like the vineyard workers, the prodigal son’s brother, even Jonah – we don’t immediately understand God’s economy and actively dislike it.

* In John, the bread is made of barley.