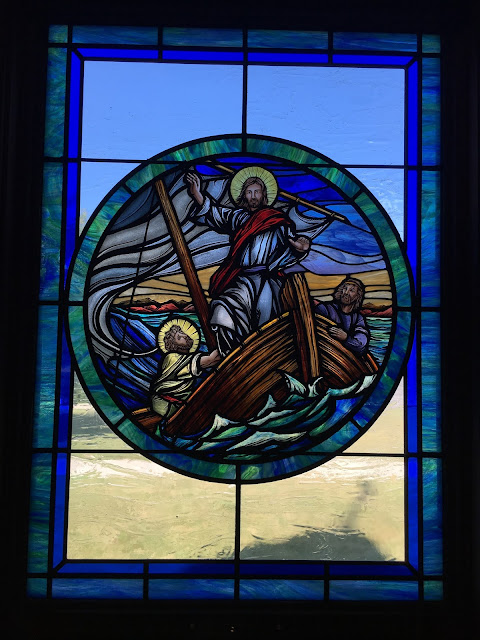 After he had fed the people, Jesus made the disciples get into a boat and precede him to the other side, while he dismissed the crowds. After doing so, he went up on the mountain by himself to pray. When it was evening he was there alone. Meanwhile the boat, already a few miles offshore, was being tossed about by the waves, for the wind was against it. During the fourth watch of the night, he came toward them walking on the sea. When the disciples saw him walking on the sea they were terrified. "It is a ghost," they said, and they cried out in fear. At once Jesus spoke to them, "Take courage, it is I; do not be afraid." Peter said to him in reply, "Lord, if it is you, command me to come to you on the water." He said, "Come."

Peter got out of the boat and began to walk on the water toward Jesus. But when he saw how strong the wind was he became frightened; and, beginning to sink, he cried out, "Lord, save me!"  Immediately Jesus stretched out his hand and caught Peter, and said to him, "O you of little faith, why did you doubt?" After they got into the boat, the wind died down. Those who were in the boat did him homage, saying, "Truly, you are the Son of God."

This story is often interpreted to mean that if we had perfect belief we would be able to perform miracles.  But, in fact, it is a rich allegory.

Bodies of water are often allegories for Chaos in Scripture.  In the first Creation story, God does not create something from nothing.  He merely distinguishes and separates.  First, He separates water from earth and confines water to basins. He brings order to welter and waste - Chaos.  In the story of the Flood, the floodwaters represent a return of Chaos -  an inevitability in every life – and the ability of people to ride it out if they have confidence that Chaos is nothing in the context of the eternal and sacred.  Moses splits the Red Sea.  Elijah and Elisha split the Jordan River.  And Jesus calms the storm and walks on water.

Like Noah, Peter is initially able to ride out Chaos.  He steps out of the boat into Chaos with the confidence that it is nothing in the context of the eternal and sacred.  But his faith fails him and he is almost overwhelmed.  It is really not an exhortation to faith.  Rather, it is the simple recognition that the comfort provided by faith simply doesn’t exist for those who lack it. This likely reveals the meaning of Jesus’s words, “the poor will become poorer and the rich will become richer.”  It is not a cynical economic prediction; it is recognition of the fact that those who are lucky enough to have an intuition of the divine will be comforted by it, while those who are not, will not.