The Parable of the Wedding Feast 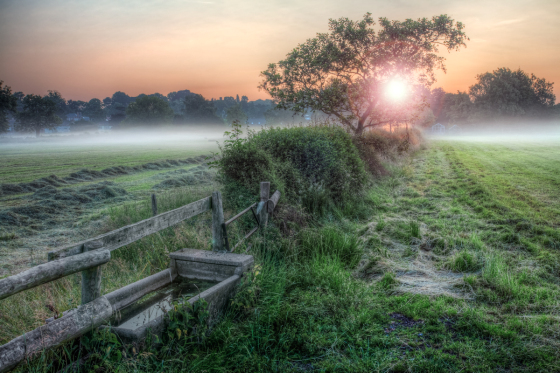 Jesus again in reply spoke to the chief priests and elders of the people in parables, saying, "The kingdom of heaven may be likened to a king who gave a wedding feast for his son.  He dispatched his servants to summon the invited guests to the feast, but they refused to come. A second time he sent other servants, saying, 'Tell those invited: "Behold, I have prepared my banquet, my calves and fattened cattle are killed, and everything is ready; come to the feast."' Some ignored the invitation and went away, one to his farm, another to his business.  The rest laid hold of his servants, mistreated them, and killed them.  The king was enraged and sent his troops, destroyed those murderers, and burned their city.  Then he said to his servants, 'The feast is ready, but those who were invited were not worthy to come.  Go out, therefore, into the main roads and invite to the feast whomever you find.' The servants went out into the streets and gathered all they found, bad and good alike, and the hall was filled with guests.

But when the king came in to meet the guests, he saw a man there not dressed in a wedding garment.  The king said to him, 'My friend, how is it that you came in here without a wedding garment?' But he was reduced to silence. Then the king said to his attendants, 'Bind his hands and feet, and cast him into the darkness outside, where there will be wailing and grinding of teeth.' Many are invited, but few are chosen."

This blog begins with the presumption that human beings do not have free will and therefore God cannot possibly judge us or even distinguish among us on the basis of our moral behavior.

The first part of this parable seems to confirm that presumption.  God invites all to feast - “the good and the bad alike.” It is reminiscent of the Parable of the Prodigal Son.  The prodigal son was a pretty immoral guy.  At the very least he compared unfavorably to his older brother who is obedient and attentive to his father.  Yet it is the prodigal son who receives the attention of the father, much to the dismay of the older brother.

But the second part of the parable seems harsh and flies in the face of the idea that God does not judge between us.  God finds someone who didn’t dress properly and tells his attendants to “cast him into the darkness outside, where there will be wailing and grinding of teeth.”

Scripture scholars agree that these were originally two separate remembrances combined into a single parable.([i])  In fact, the first part appears in Luke but the second part is entirely absent, indicating that Luke treated these as independent, and disregarded the wedding garment portion altogether. ([ii]) In putting together material, probably from Q (as the parable does not appear in Mark), the author of Matthew has converted a message of unconditional love into the transactional: while God’s love is unconditional, you must act appropriately to keep God’s love.([iii])  Without changing a word, but simply combining some text, he has made the story about judgment.

Of course, if this second part of the parable was a genuine remembrance of something Jesus said, then even if it is not a part of the wedding feast parable, it appears God does impose punishment and mete out reward for moral behavior.  How can we make sense of that?

The incidences of the imagery of gnashing of teeth included in the story are rare elsewhere.  They all occur in Matthew and Luke, and most often within material that appears to be added by an editor of the text.  In Luke, Jesus utters it as he is telling the Israelites that men from the east and west and from north and south will enter the kingdom more surely than the chosen people.([iv]) In Matthew, it is used in the explanation of the wheat and weeds parable, and a similar parable right after it about dividing good fish from bad fish. ([v]) It is used in the parable of the sheep and the goats, where a king figure – almost universally falsely assumed to be God -  divides humanity up and consigns one part of it to eternal damnation.  It is used one more time in a short parable about servants being attentive for the arrival of their masters.([vi])   Only in two places is the phrase accompanied by being thrown into the outer darkness -  here, in the second part of the wedding feast parable, and in Matthew 8:12 when Jesus marvels at the centurion’s faith and declares that the Gentiles will be welcomed into the kingdom while many of the chosen people will not be given entry.

In my book, Faith on a Stone Foundation, I argue that these instances where God is imagined flying into rages and giving up on humanity are actually images of the world, intent on extracting productivity from its members and rejecting the real message of faith.

[i] James L. Mays, Gen. Ed., Harpers Bible Commentary, (San Francisco: Harper San Francisco, 1988) 975; See also R. Brown, An Introduction to the New Testament, 196.
[ii] Matthew 22:13; Only the first (generous) part of this parable of the wedding feast exists in the apocryphal Gospel of Thomas (Saying 64).
[iii] The king’s decision to kill those who declined the invitation was probably intended to indicate that refusing the invitation has worse consequences than just missing a good time.  The invitation to the wedding is a call to wholeness, like the prohibition against eating from the Tree of the Knowledge of Good and Evil. Declining the invitation feels like a death.
[iv] Luke 13:27
[v] Matthew 13:42, 50
[vi] Matthew 24:51