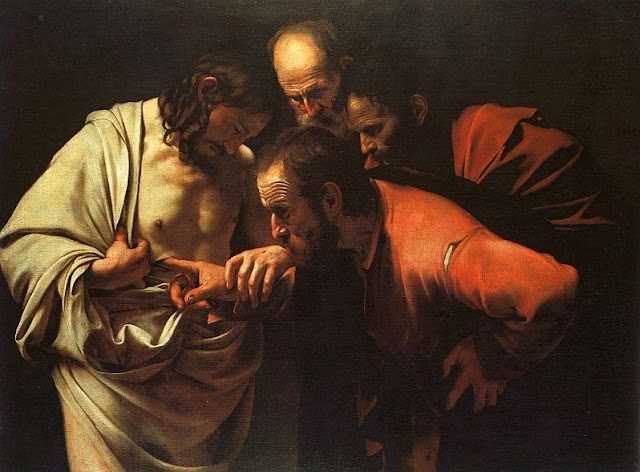 Thomas, called Didymus, one of the Twelve, was not with them when Jesus came.  So the other disciples said to him, "We have seen the Lord." But he said to them, "Unless I see the mark of the nails in his hands and put my finger into the nailmarks and put my hand into his side, I will not believe."

Now a week later his disciples were again inside and Thomas was with them. Jesus came, although the doors were locked, and stood in their midst and said, "Peace be with you." Then he said to Thomas, "Put your finger here and see my hands, and bring your hand and put it into my side, and do not be unbelieving, but believe." Thomas answered and said to him, "My Lord and my God!"

Jesus said to him, "Have you come to believe because you have seen me? Blessed are those who have not seen and have believed."

Thomas is demanding proof.  It is strange that he is held up to such criticism in the same church that declares Origen, Augustine, Plino, and Aquinas to be doctors of the church and, in some cases, saints.  These men contributed to theology with arguments for God’s existence such as the ontological argument, the cosmological argument and the teleological argument. They envisioned God as the First Cause, the Unmoved Mover and that of which nothing more perfect can be conceived.  In other words, they sought proof.

But what each of these philosophers has done is changed the image of God from the warm, personal God of Scripture Who can be moved by the suffering of His people, to a cold impersonal god of physics – a force, an explanation, and a principle.   Ironically, they have done unspeakable violence to faith with proof-seeking.

Abraham Heschel points out that people believe in God on an intuitive level.  We only use the classical proofs to defend our beliefs to others or to justify them to ourselves.  Dr. Jonathan Haidt’s research in the field of social psychology indicates we hold our moral and political views in the same way:  we only use reasons to defend or support our already firmly held intuitive views.  He uses the analogy of a rider (reason) and an elephant (intuition).  We might expect (and even hope) that our rider is in charge, but empirical evidence demonstrates the rider is simply making excuses for where the elephant has already taken us.  Anyone who believes they are guided primarily by reason, whether liberal or conservative, theist or atheist, is self-deceived.

Genuine belief cannot be commanded.  By pronouncing those who believe without evidence to be ‘blessed’, Jesus cannot possibly be suggesting they are somehow morally superior.

Instead, Jesus is pointing out that, when we insist on evidence to defend our intuition of God to others or to ourselves, we take ourselves down a path to a cold, impersonal god that has little in common with the God of Scripture.

Some do not have an intuitive sense of God’s existence.  They certainly cannot be commanded to believe something they do not feel.  A just God will love them anyway. (And, if we take the Beatitudes seriously, He loves the poor in spirit more.)  People of faith, virtually by definition, have that intuitive sense of God.  If we insist on ironclad proof to support our intuition as Thomas did, however, we can diminish our intuitive, revelatory understanding of God.

Image: The Incredulity of St. Thomas by Caravaggio (1602)  I hope he washed that finger first.