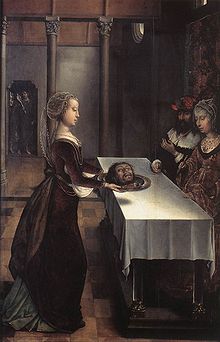 When the time arrived for Elizabeth to have her child she gave birth to a son. Her neighbors and relatives heard that the Lord had shown his great mercy toward her, and they rejoiced with her. When they came on the eighth day to circumcise the child, they were going to call him Zechariah after his father, but his mother said in reply, "No. He will be called John." But they answered her, "There is no one among your relatives who has this name." So they made signs, asking his father what he wished him to be called. He asked for a tablet and wrote, "John is his name," and all were amazed. Immediately his mouth was opened, his tongue freed, and he spoke blessing God. Then fear came upon all their neighbors, and all these matters were discussed throughout the hill country of Judea. All who heard these things took them to heart, saying, "What, then, will this child be?" For surely the hand of the Lord was with him. The child grew and became strong in spirit, and he was in the desert until the day of his manifestation to Israel.

I heard a remarkable exegesis on John the Baptist this morning. John is the only saint whose feast day (today) celebrates his nativity -  his birth - rather than his death.  His solemnity falls roughly around the summer solstice, as the hours of daylight begin to decrease (June 21). Of course, we celebrate Jesus’s nativity at Christmas – around the time of the winter solstice, as the hours of daylight begin to increase (December 21).  John, famously said of himself and Jesus, “I must decrease so that he may increase.”

It is interesting to reflect on how different John and Jesus were. John was ascetic, living on locusts and honey and wearing a camelhair robe.  Jesus was criticized for feasting and drinking so much he was considered a drunkard.  (Of the two of them, I’m glad Jesus, rather than John, is the ultimate Christian example!)  Yet they were cousins, both were given their names before their birth by angels (although only John's stuck), both were radical itinerant teachers with a band of disciples, and both would eventually be executed by the state.

It is also interesting to note that John was very interested in virtue, self-improvement, and holiness.  He shared this with St. Paul.  I have argued here and in my book that although we assume Jesus was principally focused on the same thing (to which we apply a lot of confirmation bias), that is not the case.  Was Jesus a repudiation of John? I don't think so.  But they were describing entirely different things: John described the well-lived life, while Jesus described the nature of God's relationship to us.  Both are, of course, of immeasurable importance.