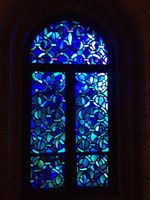 Thomas, called Didymus, one of the Twelve,
was not with them when Jesus came.
So the other disciples said to him, “We have seen the Lord.”
But he said to them,
“Unless I see the mark of the nails in his hands
and put my finger into the nailmarks
and put my hand into his side, I will not believe.”

Now a week later his disciples were again inside
and Thomas was with them.
Jesus came, although the doors were locked,
and stood in their midst and said, “Peace be with you.”
Then he said to Thomas, “Put your finger here and see my hands,
and bring your hand and put it into my side,
and do not be unbelieving, but believe.”
Thomas answered and said to him, “My Lord and my God!”
Jesus said to him, “Have you come to believe because you have seen me?
Blessed are those who have not seen and have believed.”

Do we control what we believe?  Can we, under threat of punishment, decide to believe something we’re not otherwise inclined to think is true?  If I am asked to believe that there will be a pink bow in the sky throughout the month of October in honor of breast cancer awareness month, I might be inclined to act as though I believe it for one reason or another, but I would not actually think it will come about.  Can Jesus really command us to do something that is not really in our power to decide?

Today’s reading is not a command to believe without proof.   It is an observation that faith is possible without seeing a miracle or accepting one of the classic proofs of God’s existence.   Abraham Heschel, who was perhaps the most celebrated Jewish scholar and mystic in contemporary times, wrote that we don’t believe in God because we agree with a philosophical proof.  Rather we agree with a philosophical proof to defend our belief in God.  Our intuition is a powerful tool and can often exceed the most sophisticated science in discerning reality, as Malcolm Gladwell so eloquently demonstrates in his book, Blink.  It is not always right, but it is a mistake to dismiss it as mere bias.  If you have an intuition of God’s existence and that Jesus played a unique role in human history, let that be enough.  To load philosophical baggage on that intuition is just a distraction.  Thomas is not bad for failing to believe, but he is missing out.