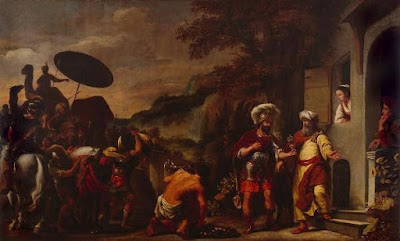 Naaman went down and plunged into the Jordan seven times
at the word of Elisha, the man of God.
His flesh became again like the flesh of a little child,
and he was clean of his leprosy.

The remarkable thing about Naaman is that he was a Syrian and that Elisha was willing and able to heal this Gentile of his leprosy.   In the Gospel story this Sunday, Jesus heals ten lepers but only one, a Samaritan “foreigner”, returns to thank Jesus.

These stories do double duty.  One the one hand, they fulfill Old Testament prophesies that Jews and non-Jews will recognize the Messiah.  On the other hand, and more importantly, they are part of an on-going theme throughout Scripture that the first shall be last.   In the Beatitudes, the poor are blessed and the rich “have already received their reward”.  In last week’s readings, poor Lazarus received heavenly peace after death while the rich man “had already received his consolation”.  In the parable of the prodigal son, the son who behaved badly gets the party and the obedient son gets left out.  And in the parable of the vineyard workers, those who worked all day get the same pay as those who started at 4pm.  This week, the outsider and foreigner receive healing while the chosen wait.

Jesus will tell the Old Testament story of Naaman in the New Testament, while he is visiting his home synagogue in Nazareth.  When he points out that a Syrian got healed while thousands suffered leprosy in Israel, his childhood friends try to throw him off a cliff, ISIS style.

We prefer that the first shall be first, but that is not God’s way.