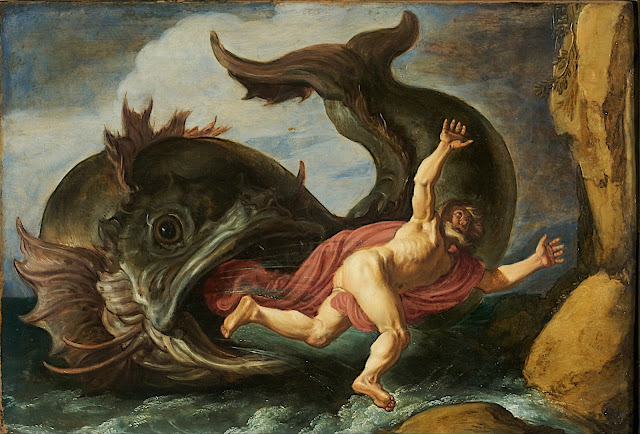 The word of the Lord came to Jonah, saying: "Set out for the great city of Nineveh, and announce to it the message that I will tell you." So Jonah made ready and went to Nineveh, according to the Lord's bidding. Now Nineveh was an enormously large city; it took three days to go through it. Jonah began his journey through the city, and had gone but a single day's walk announcing, "Forty days more and Nineveh shall be destroyed, " when the people of Nineveh believed God; they proclaimed a fast and all of them, great and small, put on sackcloth.

The Book of Jonah

The story of Jonah is often dismissed as a children’s tale about a man being swallowed by a whale.  Those who take the story slightly more seriously see it as a warning to obey the will of God.

The story is pretty simple:  God commands Jonah to preach to the Ninevites (the imposing enemy of the Israelites) to mend their ways or be destroyed.  Jonah doesn’t want to go and, instead of heading inland to Nineveh, runs for the coast and gets on a boat.  God is piqued and tosses vessel around in a storm. Jonah reveals to his shipmates that the storm is God’s wrath and they throw him overboard.  Jonah is swallowed by a fish.

But this amounts to only a small fraction of the story – both in terms of ink and in terms of importance.  Jonah is eventually spit up on the shore and he goes to Nineveh to demand their repentance.  Much to his chagrin, they instantly do exactly as asked and God accepts their contrition.

Only here does the real story begin.  Jonah is enraged by the Ninevites’ repentance and demands that God destroy the city anyway.  God is disarmingly perplexed and asks, “Do you do well to be angry?”  Jonah doesn’t care and persists in his anger no matter how hypocritical or silly God makes him look.

This is a recurrent theme in Scripture.  God doesn’t distinguish between the good and the bad, the worthy or the unworthy – we do – and we demand that He do too.  But He makes the rain fall on the good and the bad alike. Multiple parables have this as its theme: The Prodigal Son, the Workers in the Vineyard, and another almost universally misinterpreted passage: The Beatitudes.