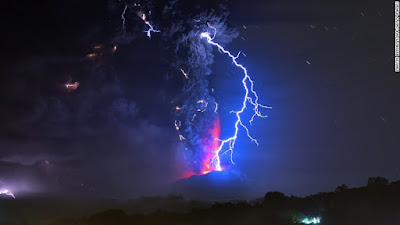 On the third day, when it was morning, there was thunder and lightning, and a thick cloud on the mountain, and the sound of an exceedingly loud trumpet; and all the people who were in the camp trembled.  Moses led the people out of the camp to meet God, and they stood at the lower part of the mountain.  All of Mount Sinai smoked, because God descended on it in fire; and its smoke ascended like the smoke of a furnace, and the whole mountain quaked greatly.  When the sound of the trumpet grew louder and louder, Moses spoke, and God answered him by a voice.  God came down on Mount Sinai, to the top of the mountain. God called Moses to the top of the mountain, and Moses went up.

Sunset today marks the beginning of the month-long Jewish observance of Elul.  In the Book of Exodus, God writes the Ten Commandments on stone tablets memorializing the covenant to which the Israelites had already twice verbally agreed - shouting their agreement with one voice.  When Moses arrives at the foot of Mount Sinai with the tablets, he sees they have already violated the commandment against keeping idols by making a golden calf. In a rage, Moses smashes Tablet 1.0.

In all the dialogue that follows, the Israelites never apologize for their violation nor do they insist they’ll do better.  They don't shout their agreement to keep the commandments in one voice like they did before. Miraculously, God is willing to enter into the covenant again.  It is God’s willingness to re-covenant despite our inevitable and dismal failure, not our promise to keep the commandments we so quickly violated, that is the whole point of the narrative. Those who believe that keeping commandments is the heart of faith should re-read the story.

Moses ascends Mount Sinai again and stays for a month as God prepares Tablet 2.0.  According to some traditions, this month of Elul commemorates that month-long preparation.  It is an opportunity to wake up, shake off our complacency and prepare for the Days of Awe.

I wish all my Jewish brothers and sisters, K'tiva VaHatima Tova.