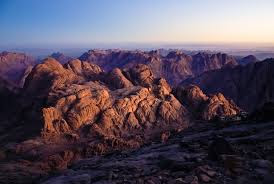 Jesus took Peter, James, and John his brother,
and led them up a high mountain by themselves.
And he was transfigured before them;
his face shone like the sun
and his clothes became white as light.
And behold, Moses and Elijah appeared to them,
conversing with him.
Then Peter said to Jesus in reply,
"Lord, it is good that we are here.
If you wish, I will make three tents here,
one for you, one for Moses, and one for Elijah."
While he was still speaking, behold,
a bright cloud cast a shadow over them,
then from the cloud came a voice that said,
"This is my beloved Son, with whom I am well pleased;
listen to him."
When the disciples heard this, they fell prostrate
and were very much afraid.
But Jesus came and touched them, saying,
"Rise, and do not be afraid."
And when the disciples raised their eyes,
they saw no one else but Jesus alone.

As they were coming down from the mountain,
Jesus charged them,
"Do not tell the vision to anyone
until the Son of Man has been raised from the dead."

Jesus’s face shining like the sun as they descend is a clear parallel to the shining face of Moses as he descends Mount Sinai having heard that God would forgive the Israelite’s sin and be their God.  Here are two powerful examples of transfiguring I/Thou encounters with God, each consistent with the hallmarks of such encounters as described by Martin Buber, including that both are nearly wordless: The Transfiguration occurs in fourteen words, while the conveyance of Torah is said to occurs in just ten utterances.

The virtually comedic way in which God literally interrupts Peter’s planning reminds us of the story of Mary and Martha.  Martha complains to Jesus that her sister, Mary, is just sitting at Jesus’s feet while Martha works hard in the kitchen.  Jesus defends Mary’s decision to forego achieving, doing, performing and accomplishing in favor of simply absorbing.  The two women continue to display the same personality traits later in the story when their brother, Lazarus, dies.  Mary remains at home while Martha rushes to meet Jesus at the tomb.  As Jesus is about to raise her brother from the dead, Martha characteristically warns him against entering the tomb because of the smell of decay.  Similarly, Peter’s construction plans are forgotten when the voice of God causes him to throw himself to the ground.

The appearance of God is terrifying to the apostles, and it is the divine messenger – usually an angel, but in this case, Jesus – who must tell them that they have nothing to fear from God’s presence.  Fear is a natural response to the divine – Rudolf Otto described it as ‘mysterium tremendum’ and coined the word ‘numinous’ to describe God.  But God seeks to overcome that fear.  Our relationship to God is characterized by both asymmetry and proximity.