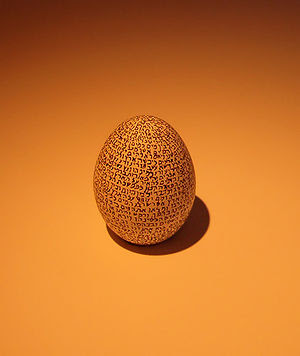 For God so loved the world, that he gave his one and only Son, that whoever believes in him should not perish, but have eternal life. For God didn’t send his Son into the world to judge the world, but that the world should be saved through him.

He is the image of the invisible God, the firstborn of all creation.  For by him all things were created in the heavens and on the earth, visible things and invisible things, whether thrones or dominions or principalities or powers. All things have been created through him and for him. He is before all things, and in him all things are held together. He is the head of the body, the assembly, who is the beginning, the firstborn from the dead, that in all things he might have the preeminence.  For all the fullness was pleased to dwell in him,  and through him to reconcile all things to himself by him, whether things on the earth or things in the heavens, having made peace through the blood of his cross.

Image: The first chapter of Genesis written on an egg.  Israel Museum