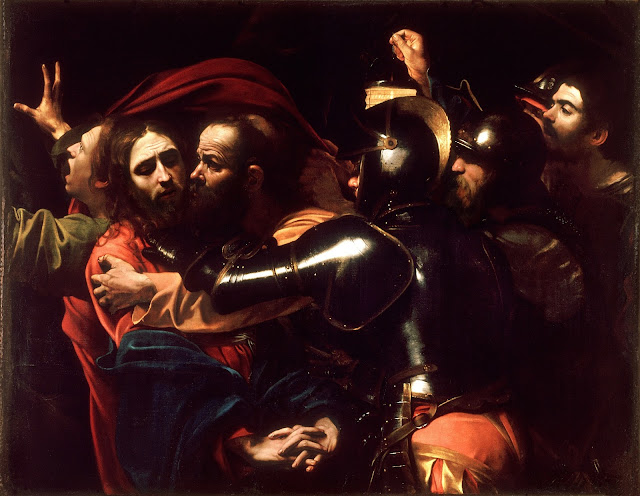 Before the feast of Passover, Jesus knew that his hour had come
to pass from this world to the Father.
He loved his own in the world and he loved them to the end.
The devil had already induced Judas, son of Simon the Iscariot, to hand him over.
So, during supper,
fully aware that the Father had put everything into his power
and that he had come from God and was returning to God,
he rose from supper and took off his outer garments.
He took a towel and tied it around his waist.
Then he poured water into a basin
and began to wash the disciples' feet
and dry them with the towel around his waist.
He came to Simon Peter, who said to him,
"Master, are you going to wash my feet?"
Jesus answered and said to him,
"What I am doing, you do not understand now,
but you will understand later."
Peter said to him, "You will never wash my feet."
Jesus answered him,
"Unless I wash you, you will have no inheritance with me."
Simon Peter said to him,
"Master, then not only my feet, but my hands and head as well."
Jesus said to him,
"Whoever has bathed has no need except to have his feet washed,
for he is clean all over;
so you are clean, but not all."
For he knew who would betray him;
for this reason, he said, "Not all of you are clean."

So when he had washed their feet
and put his garments back on and reclined at table again,
he said to them, "Do you realize what I have done for you?
You call me 'teacher' and 'master,' and rightly so, for indeed I am.
If I, therefore, the master and teacher, have washed your feet,
you ought to wash one another's feet.
I have given you a model to follow,
so that as I have done for you, you should also do."

Almost every commentary on this passage assumes that Jesus is providing us with a moral example – an example of service to others and humility.

But this is the Gospel of John, in which Jesus is recognized as the Incarnation of God.  These are Jesus’s last moments as a free man.  The washing of the feet entirely replaces, in John, the breaking of the bread that is the focal point of the Last Supper in the other three Gospels.  This is Passover – memorializing when God saved Israel with a strong hand and immense divine fireworks.  This is an extraordinarily important moment.  Is it possible the Incarnation comes down to, “be a nice person”?  Aren’t secular people nice people?

We can be forgiven for thinking this is just a moral example.  Jesus says as much in the closing line.  But there are clues there is more going on:

Peter wonders at what Jesus is doing.  Jesus tells him he will have absolutely no idea what’s going on.  Now, Peter is routinely depicted as being pretty dense throughout the Gospels, but to be unable to understand a simple moral example of service to others would be a new low.

Peter insists Jesus will not subordinate himself by washing Peter’s feet.  Jesus lashes out.  He doesn’t say, “well, then you won’t get the benefit of this terrific moral example I am staging.”  The consequences are much more serious - he says Peter can have no part in him.

Peter thinks he gets it - and wants more.  If Jesus is handing out the practical benefit of a good washing, Peter wants his hands and feet washed too.   But Jesus tells him there is more going on than just washing.  What Jesus offers is of no practical benefit.  This is a sacrament.

Then Jesus announces that he is providing an example.  But of what? The Lectionary version of this story ends before a critical line. After saying, “I have given you a model to follow, so that as I have done for you, you should also do,” Jesus says:

Most certainly I tell you, a servant is not greater than his lord, neither is one who is sent greater than he who sent him. If you know these things, blessed are you if you do them. (John 13:16-17)

This is mysterious. If this is parable about serving one another and humility, why would Jesus affirm that servants are not greater than their lords?  Fortunately, Jesus expressly answers this, but not for another two chapters:

Remember the word that I said to you: ‘A servant is not greater than his lord.’ If they persecuted me, they will also persecute you. If they kept my word, they will also keep yours. But they will do all these things to you for my name’s sake, because they don’t know him who sent me. If I had not come and spoken to them, they would not have had sin; but now they have no excuse for their sin. He who hates me, hates my Father also. If I hadn’t done among them the works which no one else did, they wouldn’t have had sin. But now they have seen and also hated both me and my Father. But this happened so that the word may be fulfilled which was written in their law, ‘They hated me without a cause.’ (John 15:20-25)

Jesus is not giving the apostles an example of how to live; he is giving them an example of how to die.  As the first Christians, they will not be regarded as heroes; they will be regarded as the worst kind of heretic.  According to tradition, they will be hunted down and killed in the name of God.  The Passover God will be nowhere to be seen.  In a few hours, Jesus will be mocked by the crowd and by a thief for his belief in a God Who fails to save him from the Cross.  Satan mocked Jesus too – for believing in a God who fails to turn stones into bread and protect His only son from a plunge off the Temple.  Judas decides to betray Jesus when Jesus accepts an extravagant gift of nard that could have been sold and the proceeds given to the poor - Judas is scandalized by the lack of practical social benefits Jesus’s faith entails.  In the Beatitudes, Jesus tells the crowd their good fortune or misfortune is not the result of divine reward or punishment (the prevailing theology being that if you were sick, it was because of your sin) – faith doesn’t even incentivize good behavior. Although they have some narrow escapes and some miraculous help, in the end, the apostles suffer the same fate as Jesus.  They are just like us – everyone’s last prayer goes unanswered.   Faith does not come with benefits.  Jesus washes the feet of his apostles sacramentally - to initiate them in a group bound to be misunderstood, hated and persecuted, and who can expect no help from the Passover God, but who will find meaning in faith nonetheless.  Indeed, this is a cup reserved just for people of faith, and we must support each other in drinking from it.