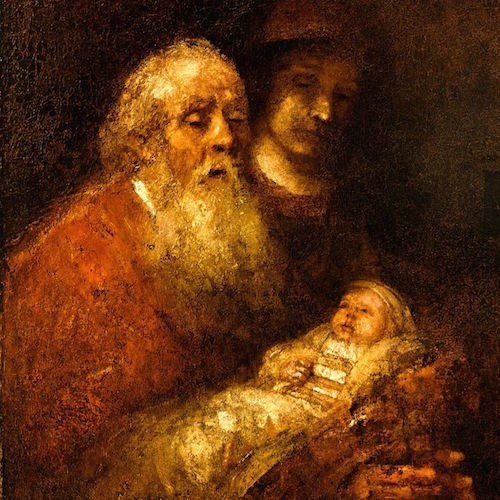 Now there was a man in Jerusalem whose name was Simeon. This man was righteous and devout, awaiting the consolation of Israel, and the Holy Spirit was upon him. It had been revealed to him by the Holy Spirit that he should not see death before he had seen the Christ of the Lord. He came in the Spirit into the temple;  and when the parents brought in the child Jesus to perform the custom of the law in regard to him,  He took him into his arms and blessed God, saying: "Now, Master, you may let your servant go in peace, according to your word, for my eyes have seen your salvation, which you prepared in sight of all the peoples, a light for revelation to the Gentiles, and glory for your people Israel." The child's father and mother were amazed at what was said about him; and Simeon blessed them and said to Mary his mother, "Behold, this child is destined for the fall and rise of many in Israel, and to be a sign that will be contradicted - and you yourself a sword will pierce - so that the thoughts of many hearts may be revealed."

In Chapter 16 of the Gospel of Matthew, Jesus announces, “Truly, I say to you, there are some standing here who will not taste death before they see the Son of Man coming in his kingdom.

This line inspired early Christians to believe the Second Coming would happen within a generation.  It also may have inspired the legend, referred to in the enigmatic third-to-last verse of the Gospel of John (21:23), which indicated early Christians believed the apostle John would live an unnaturally long time until Jesus returned.  It appears in today’s reading as a blessing received by Simeon as reward for his righteousness.

But unnatural longevity was also sometimes considered a curse. A thirteenth century legend told of a man named Cartaphilus – sometimes depicted as Pontius Pilate’s gatekeeper who struck Jesus as he carried the cross to Calvary – who is cursed to wander the earth until the Second Coming. Apocryphal stories about encounters with individuals claiming to be Cartaphilus in the 1200s and 1500s received a lot of attention (sometimes with an ugly anti-Semitic cast) and most recently he was played as an ageless, murderous Catholic priest, prominent in the 1988 apocalyptic movie, The Seventh Sign.