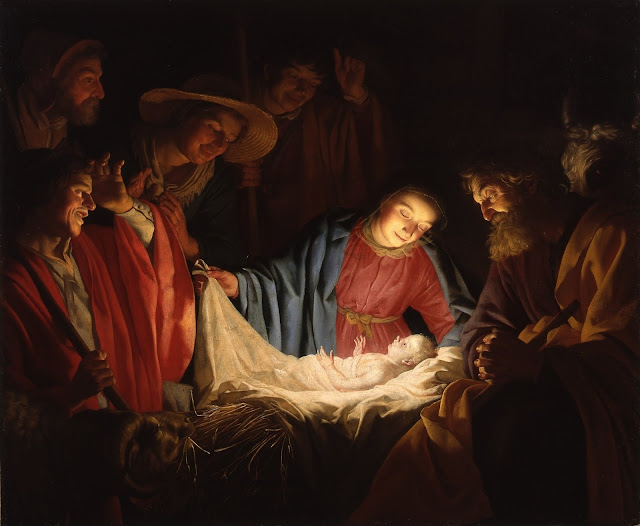 Why does the idea that we don’t have free will make us so anxious?   Without free will we feel enslaved. We are enslaved to a mechanistic, deterministic universe where everything that happens is either the inevitable reaction to what has happened before according to the laws of classic physics, or is the arbitrary, random effect of quantum physics.   It renders us nothing more than complex organic machines responding to stimuli, with no more inherent value or dignity than a toaster or computer.   We assume that to have value and dignity means to be able to make the right decision, to choose freely between good and bad and to choose well.  To have value and dignity, we assume, we must perform some task that it was possible we wouldn’t perform - that we were free to perform or not perform the task - and to choose the good, the socially responsible, and maybe even the selfless.  We want to be treated as responsible and competent - capable of self-direction and self-discipline.  Our culture in particular values the “self-made man” and the “self-made woman” who pull themselves up by the bootstraps and take adult responsibility and accept blame when it arises.  As children we eagerly anticipated the day when we would be considered adults – free, responsible agents and captains of our own destiny.   We have a natural and evolved desire to see that the moral freeloader is punished.  But our desire for free will goes even deeper.  We dread the loss of free will because we feel it deprives us of any reason anyone might have to love us any more than they love someone else, or even something else.  Slavery, no matter how benign, always diminishes dignity, and our slavery to the forces of causation feels like the utter destruction of our dignity. To the Christian, determinism deprives us of any reason God might love any human being.  It is far more palatable to think that God deprives some human beings of love – those who fail to believe, fail to behave, or fail to be contrite – but it’s an altogether different order of dread to think that God has no reason to love any of us.

At Christmas, we celebrate the Incarnation of God as a human being.  It hardly matters whether Jesus was the product of a virginal birth or how this incarnation manifested itself.  What matters is that we as a people of faith have received the inspired message that God became man, and how we unpack what that means.

The Incarnation does not cause us to magically have the capacity for free will.  The Incarnation is the culmination of a process of adoption that renders our lack of free will irrelevant.  When the Son of God becomes incarnate as a human being, God adopts humanity as His people.  Our acceptance into God’s divine family, however we may imagine it, grants us divine dignity and ends our slavery.  We are declared loved and accepted.   We did not earn this inheritance, but received it in spite of ourselves.   God has chosen to overlook something far more serious than our failure to make good moral decisions from time to time. God has chosen to overlook our inability to make moral decisions in the first place.   Original Sin is not Adam and Eve’s decision to disobey God and eat fruit from a forbidden tree, nor is it the decision to assert their moral autonomy when they had none, but it is rather their utter inability to make moral decisions at all.  The failure of the Israelites at the base of Mount Sinai wasn't the bad choice to cast a golden calf, but their inability to make a free decision in the first place.  Original Sin is the causal slavery we dread – the fact that without the intervention of God we are no better, no more significant, no worthier of love than automatons. It is Original Sin because we all share it – no one of us is any more or less free than another – we are all equally enslaved by Original Sin and there is nothing we can do about it ourselves. No one is born without this shortcoming or without the impulse to deny it and declare ourselves morally autonomous.   This is what happened in the Garden.  Although attaining moral knowledge ought to have been a positive event – as the snake promised it would be - the members of the first family are suddenly gossiping, blaming one another, and even murdering each other.  But more than having bad social consequences, moral judgment makes us look at ourselves differently.  Suddenly our self-worth and dignity are inextricably intertwined with our moral worth and our social worth.  Suddenly we are not valued for our mere existence – we have no intrinsic, ineradicable worth - we are only as valuable as our place on the moral spectrum and our value to society.   God begins sewing garments for Adam and Eve but we know and He knows it is not enough.   For centuries, religion has largely been an attempt to achieve moral perfection in order to re-enter paradise - to encourage us to increase our moral and social worth - but we run full speed into the flaming sword.  Embracing the illusion of moral autonomy and striving for moral perfection is not the road back into the Garden.  In fact, that road compounds the problem – it is the problem - and leads in the opposite direction.

Nor is simply embracing our lack of free will the road back.  Science asserts we don't have free will.  But raw science cannot account for human dignity. Science can tell us what we are worth as a handful of organic chemicals, and it can measure statistically what we produce and what we consume, and it can place us in innumerable scales of measurement.  But it cannot assert our intrinsic value.  God’s incarnation is an existential resolution to this problem.  By becoming human, God is declaring, once and for all and with the thunderous,volcanic weight of divine authority, that we are more than our biography.   We are more than what we can do for God or for one another.  We are valuable to God by virtue of our existence alone and His unreasoning decision to value us.  We have nothing to offer in return – no amount of good behavior will pay the ransom for God’s love,[i] and no amount of bad behavior can diminish it.  But, then again, love is not love if it is bargained for.  Grace is not grace if it is earned.  The Incarnation is the ultimate message of redemption:

For God so loved the world, that He gave His one and only Son, that whoever believes in him should not perish, but have eternal life.  For God didn’t send His Son into the world to judge the world, but that the world should be saved through him.[ii]

This is the culmination and crossroads of many themes of Scripture and hearkens back to the earliest moments.  When God announces that He made us in His image, He was essentially affirming - right there in the beginning - that we were family to Him.  The Incarnation is the total destruction of the shame inherent in our unfree nature. God has become one of us and, by so doing, has torn the dividing line between the human and the divine and imbued us with dignity.  This bridging of the gap between the divine and the human is a theme repeated throughout Scripture.  Jacob, later to be renamed Israel, has a vision of a ladder between heaven and earth where angels freely pass between the two realms and God stands at the top and declares “Behold, I am with you and will keep you wherever you go.”[iii] After the moral debacle of Mount Sinai, when God should have been at His most distant, instead He demands that the people construct a movable sanctuary - the Tabernacle Tent - for Him to reside in. [iv]  God, thereafter, dwells among His people.  Isaiah prophesies that a messiah will be born and his name, Immanuel, will mean “God is with us.”[v] The Incarnation of God is born, lives and dies as we do.  And when Jesus finally breathes his last breath on the Cross, the veil that separates the Holy of Holies in the Temple from the rest of the world, fashioned according to God’s instructions in Exodus,[vi]  is torn in two [vii].

Science and philosophy conclude with ever greater certainty that we don't have free will.  This seems like a disaster for faith and a cataclysm for human dignity.  We may assume that anything we can salvage from it will be small, compromised, and hollow.  But the truth is that our lack of free will was the central point of Scripture from the beginning and is at the heart of our relationship to God - and it is a warm, personal, grace-filled relationship.  When we assert the illusion of free will we adopt shame, judgment and hate of each other and ourselves.  God has been working throughout the Scriptural narrative to relieve that shame.  First, He knits Adam and Eve clothing to cover it.  Then, at Sinai, He boldly announces that He will love us despite our lack of free will.  Finally, at the birth of Jesus, He becomes one of us, completing the adoption and eliminating anything we have to be ashamed about.  Far from diminishing human dignity, our lack of free will and God's choice to love us anyway imbues us with divine dignity.  And the soul felt its worth.

O Holy Night!
The stars are brightly shining
It is the night of the dear Savior's birth!
Long lay the world in sin and error pining
Till he appeared, and the soul felt its worth.
A thrill of hope the weary soul rejoices
For yonder breaks a new and glorious morn.