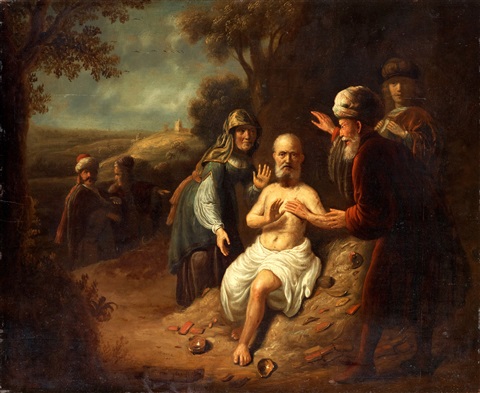 Job spoke, saying: Is not man's life on earth a drudgery? Are not his days those of hirelings? He is a slave who longs for the shade, a hireling who waits for his wages. So I have been assigned months of misery, and troubled nights have been allotted to me. If in bed I say, "When shall I arise?" then the night drags on; I am filled with restlessness until the dawn. My days are swifter than a weaver's shuttle; they come to an end without hope. Remember that my life is like the wind; I shall not see happiness again.

After Jonah, Job is the most misinterpreted and underrated book of the Bible.

We might think that this book provides evidence of a Manichean cosmic order: A good god (God) and a bad god (Satan) constantly vie for power in the world.  But there is ample evidence that this is not the point.  First, if we reflect on the times Satan appears as a personification in the Old and New Testaments, we realize there are only three: In Zechariah 3:1-7 where he is a figure in a dream rich with allegory, in the New Testament as the tester of Jesus in the desert, and here. (The snake in the Garden is not Satan.  It is a snake.) Second, the Book of Job is an extended examination of the question, “Why do bad things happen to good people?”.  Many answers are offered, but the work of Satan is not one of them.  After the setup in the very first verses of the book in which God and Satan make an improbable bet, Satan exits the stage and is never mentioned again.

We might also reflexively think that this is a story about the importance of trusting God even when times are tough, but a close reading of the text doesn’t support that claim either.

Job is a very good and moral man. We are told this upfront from what writers call the “third-person omniscient point of view”.  When tragedy strikes, his three friends come to console him and offer him advice.  Each one, over the course of many chapters, comes to the same conclusion:  Bad things only happen to bad people, so Job must have done something bad and must repent.  Job and we, the reader, know Job has done nothing bad.  Eventually God answers Job and his answer is exceptionally poetic, but not particularly forthcoming.  He begins:

Where were you when I laid the foundations of the earth?

God does not answer the question, “Why do bad things happen to good people?”, but one thing is for sure.  Job’s three friends are wrong and God curses them for pestering Job with their lousy theology.  It is up to Job to pray for them and release the curse.

If we do not have free will (as science and philosophy seem to conclude) then God cannot possibly reward good behavior or punish bad.  Although the author of The Book of Job did not have the language to conceive of a lack of free will, it was revealed to him that God is, somehow, not a rewarder and punisher. How extraordinary!

God’s beautiful speech to Job in its entirety (almost) appears below:

“Where were you when I laid the foundations of the earth?
Declare, if you have understanding.
Who determined its measures, if you know?
Or who stretched the line on it?
What were its foundations fastened on?
Or who laid its cornerstone,
when the morning stars sang together,
and all the sons of God shouted for joy?

“Or who shut up the sea with doors,
when it broke out of the womb,
when I made clouds its garment,
and wrapped it in thick darkness,
marked out for it my bound,
set bars and doors,
and said, ‘You may come here, but no further.
Your proud waves shall be stopped here’?

“Have you commanded the morning in your days,
and caused the dawn to know its place,
that it might take hold of the ends of the earth,
and shake the wicked out of it?
It is changed as clay under the seal,
and presented as a garment.
From the wicked, their light is withheld.
The high arm is broken.

“Have you entered into the springs of the sea?
Or have you walked in the recesses of the deep?
Have the gates of death been revealed to you?
Or have you seen the gates of the shadow of death?
Have you comprehended the earth in its width?
Declare, if you know it all.

“What is the way to the dwelling of light?
As for darkness, where is its place,
that you should take it to its bound,
that you should discern the paths to its house?
Surely you know, for you were born then,
and the number of your days is great!
Have you entered the treasuries of the snow,
or have you seen the treasures of the hail,
which I have reserved against the time of trouble,
against the day of battle and war?
By what way is the lightning distributed,
or the east wind scattered on the earth?

Who has cut a channel for the flood water,
or the path for the thunder storm,
to cause it to rain on a land where there is no man,
on the wilderness, in which there is no man,
to satisfy the waste and desolate ground,
to cause the tender grass to grow?
Does the rain have a father?
Or who fathers the drops of dew?
Whose womb did the ice come out of?
Who has given birth to the gray frost of the sky?
The waters become hard like stone,
when the surface of the deep is frozen.

“Can you bind the cluster of the Pleiades,
or loosen the cords of Orion?
Can you lead the constellations out in their season?
Or can you guide the Bear with her cubs?
Do you know the laws of the heavens?
Can you establish its dominion over the earth?

“Can you lift up your voice to the clouds,
That abundance of waters may cover you?
Can you send out lightnings, that they may go?
Do they report to you, ‘Here we are’?
Who has put wisdom in the inward parts?
Or who has given understanding to the mind?
Who can count the clouds by wisdom?
Or who can pour out the containers of the sky,
when the dust runs into a mass,
and the clods of earth stick together?

“Can you hunt the prey for the lioness,
or satisfy the appetite of the young lions,
when they crouch in their dens,
and lie in wait in the thicket?
Who provides for the raven his prey,
when his young ones cry to God,
and wander for lack of food?