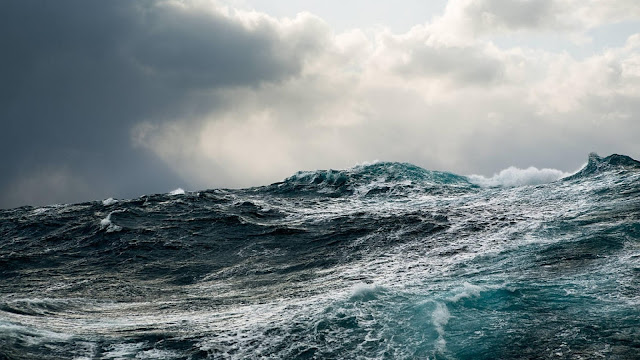 Jesus made the disciples get into a boat and precede him to the other side of the sea, while he dismissed the crowds. After doing so, he went up on the mountain by himself to pray. When it was evening he was there alone. Meanwhile the boat, already a few miles offshore, was being tossed about by the waves, for the wind was against it. During the fourth watch of the night, he came toward them, walking on the sea. When the disciples saw him walking on the sea they were terrified. “It is a ghost,” they said, and they cried out in fear. At once Jesus spoke to them, “Take courage, it is I; do not be afraid.” Peter said to him in reply, “Lord, if it is you, command me to come to you on the water.” He said, “Come.” Peter got out of the boat and began to walk on the water toward Jesus. But when he saw how strong the wind was he became frightened; and, beginning to sink, he cried out, “Lord, save me!” Immediately Jesus stretched out his hand and caught him, and said to him, “O you of little faith, why did you doubt?”

Here, as is the case throughout Scripture, a body of water represents chaos (The Deep of the creation story, the Flood, the Red Sea, the Jordan River, etc.) and faith in the divine helps control chaos and restore order and calm.

This story is another example of a recurring theme in the New Testament: the benefits of faith are not conferred by God - they are simply claimed by us.  When Jesus heals someone he is always careful to give them the credit – “your faith has healed you.”  The story of the hemorrhaging woman appears to be solely dedicated to the proposition that healing and forgiveness are not conferred by Jesus, but are simply available to be acknowledged by those who know to seek them.  It is a virtual tautology: faith cannot give you any comfort if you do not have faith.  You cannot feel what Paul called the peace beyond all understanding if you dismiss it as a fantasy.  Ask and ye shall receive, but if you do not know to ask you cannot receive.  I am convinced that this is what Jesus meant when he said the poor will become poorer and the rich shall become richer.   If you are not inclined to believe, no one, not even God, can turn that around for you and you will become spiritually poorer still.  But if you are inclined to believe, you will know to pursue the divine and become spiritually ever richer.  God does not make you poor or rich.  You do.