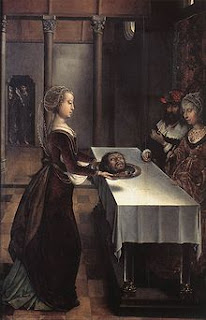 Herod was the one who had John the Baptist arrested and bound in prison
on account of Herodias, the wife of his brother Philip, whom he had married. John had said to Herod, “It is not lawful for you to have your brother’s wife.” Herodias harbored a grudge against him and wanted to kill him.

The contrasts between John and his cousin, Jesus, are remarkable.

John wears a camelhair shirt, eats locusts and requires his disciples to fast and abstain from wine.  John’s disciples pointedly ask why Jesus’s disciples eat and drink so freely (Lk 5:33).  Jesus himself, we are told, drinks so copiously he is considered a drunkard by some.  John’s stridency finally gets him killed in a pretty silly dispute.  He criticizes the Roman-installed governor, Herod, for marrying his sister-in-law and she arranges his execution.  Jesus carefully avoids entanglements with the Roman occupiers and actually winds up pointing to some Roman centurions as examples of righteous Gentiles.

Jesus both admires John and criticizes him: “Of all who have ever lived, none is greater than John the Baptist. Yet even the least person in the Kingdom of Heaven is greater than he is.”  He goes to John to be baptized, and he clearly mourns his death, but Jesus has a different message and finally, while John merely prepared the way, Jesus embodies the Way.